The Sacred Areas at the “Turtle Bay Resort” 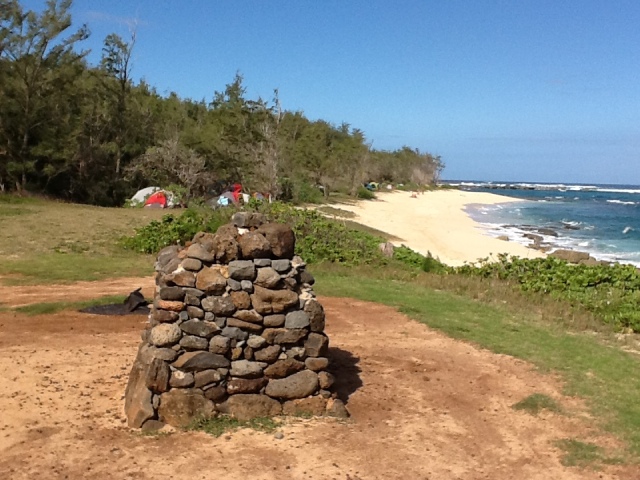 Above. Alongside Kaihalulu Beach, a stone altar, in the foreground, serves both an altar and a marker.

The grounds of the “Turtle Bay Resort” provided many natural places, such as nature preserves, for recreation. Furthermore, the resort also explained and showed on-site, perhaps the only explanation on Oahu, as well as the rest of Hawaii, the perfect example of a significant ancient Hawaiian concept, land divisions, or the ahupua’a, which is a compound word composed of two words.

So, another definition of ahupua’a, is “An altar where food is offered to gods.”

In ancient Hawaii, highly respected were the boundaries of the ahupua’a. Here at the resort, in the present day, we have two functional and active markers of the ahupua’a. Only one of the two markers, which also serve as altars, is shown in this blog.

Above. Along a hike in the nature preserve, there were placards with maps and explanations, such as this one. This location is one of the few places on Oahu where the significance of the ahupua’a is explained and demonstrated.

Above. While in the resort’s nature preserve, placards with maps and explanations such as the above are very important; otherwise, passersby could walk by and miss the importance, for example, of an object, plant, or trail, which has cultural or historic significance.

Above. I am at the farthest northern point of the golf course and the resort. On the left, in the far distance, is a National Wildlife Refuge, under the executive branch of the United States Department of the Interior, Fish and Wildlife Service, which is dedicated to “conserve, protect and enhance fish, wildlife and plants and their habitats.”

Above, Birds crane their necks back and forth and make a distinct sound.

Below. Video of the birds and its sounds. Note: the clicking or knocking sounds, at five, fourteen and 26 seconds into the video, comes from the birds!

Above. A portable toilet assembly signals the boundary between the wilderness and the resort. In other words, there are cues to the visitors about where one is located or about what one should do about personal hygiene.

So, just when you may think a resort is just about trips to the spa, lounges around the pool, and bar hopping, a place such as “Turtle Bay Resort” provides an example of how a resort can offer cultural and environmental stewardship! Good job, “Turtle Bay Resort!”

Proposed Ala Wai Canal “Heiau” and Lock and Dam WITH Narration, VIDEO

Proposed Ala Wai Canal “Heiau” and Lock and Dam, BLOG

The Ala Wai “Heiau,” VIDEO

“Backpacking with Strangers : A Great Course for Prepping,” BLOG

Emy Louie is a “kama’aina/haole” (native/non-native person) who adventures to places on Oahu, Hawai’i, where “kama’aina” do not usually go to, that tourists go to, and vice versa. She lived in Honolulu in the ’70s and ’80s and visits Honolulu annually.

A Chinese American, Emy Louie (雷慧妮) was born in Hong Kong and raised in Honolulu, Hawai’i. She graduated from the University of Hawai’i at Mānoa in 1991 and earned a degree in Architecture.

In 1993, Ms. Louie relocated to the mainland United States and from 2007 to 2012, she hosted her radio show to interview the movers and shakers of sustainable design and green building and taught continuing education classes to design professionals.

She is president of Emy Louie, Consulting Services, which works on design, conservation, and environmental projects. Since 2018, Ms. Louie spends her time in Honolulu and Central America to do environmental field research.